In October, I was thrilled to publish Beneath the Wax, the first novella in Nthato Morakabi’s sci-fi horror series! With the latter half of 2018 proving to be a very busy year, the publication of this book ranks as one of my highlights! 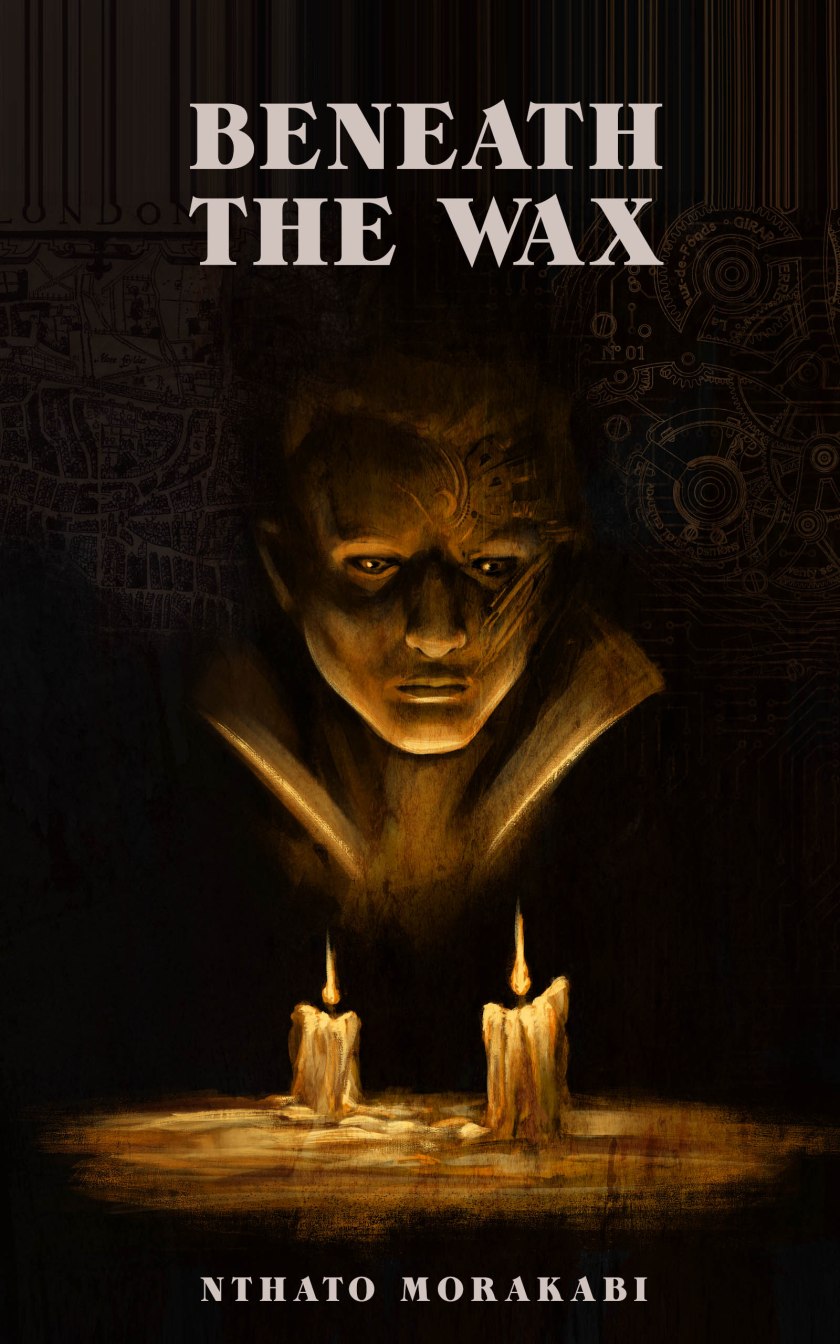 With a gorgeous cover design by Nico Venter (who is currently working on the artwork for Jozi Flash 2018 – YAY!), and exceptional story-telling by Nthato, Beneath the Wax is a perfect Christmas gift for fans of horror and sci-fi.

1723: Constantine Bourgeois is a man of many secrets. Artisan by day, killer by night, he turns his victims into wax figures for his shop.
2045: Richard Baines works for the renowned Anthony Garfield Historical Museum. His mundane existence is a stark counterpoint to his fascination with serial killers and science fiction.
Constantine’s nightmares drive him to undertake a journey to uncover a long-forgotten secret. Richard’s research uncovers a company secret and the mystery of Madame Bourgeois.
Two men, two timelines, and truths that will only be revealed when they look Beneath the Wax…

Purchase the novel on Amazon* today, or if you’re a book blogger and would like to review the novella, please leave a comment below and I’ll get in touch with you ASAP.

*I would like to state that Chasing Dreams Publishing operates as an independent publisher, and 100% of royalties earned from the sale of Beneath the Wax go to the author. If you would like to make his Christmas that much more festive, please consider supporting him by purchasing a copy. If you’d like to make it doubly festive, an honest review on Amazon would be even more appreciated! 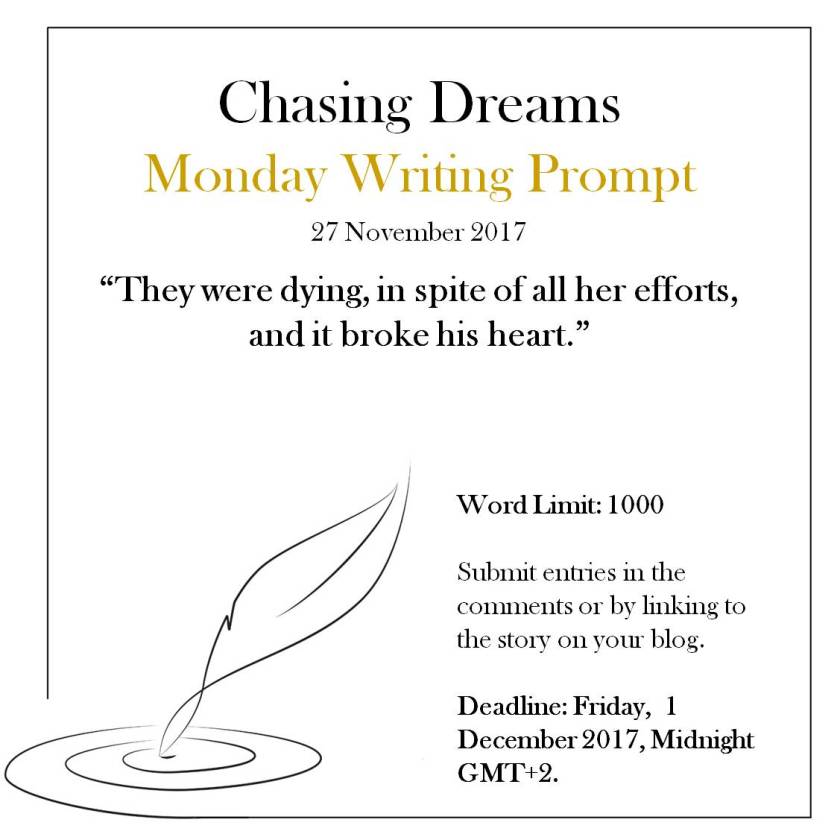 The prompt should be included in your story which can be any genre. Word limit is a maximum, there is no minimum.

Stories can be posted directly in the comments, or with a link to the post on your own blog. If you’re using the latter method, please include the title of your story.

Deadline for submission is Friday, 1 December 2017 at midnight, GMT+2. Winning stories will be announced on the following Monday. Bragging rights to the winners. 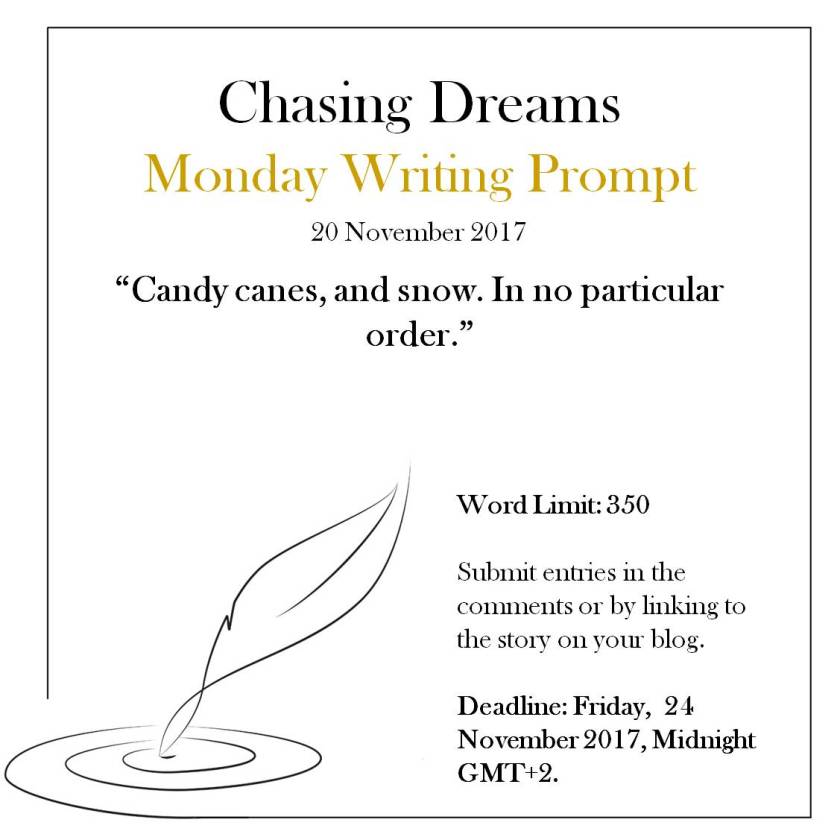 The prompt should be included in your story which can be any genre. Word limit is a maximum, there is no minimum.

Stories can be posted directly in the comments, or with a link to the post on your own blog. If you’re using the latter method, please include the title of your story.

Deadline for submission is Friday, 24 November 2017 at midnight, GMT+2. Winning stories will be announced on the following Monday. Bragging rights to the winners.

I’m so thrilled to announce that the winner of the #FindJoziFlash17 was drawn just after midnight last night, and it was none other than Faye Kirwin over at Writerology!

I’m also thrilled to let you know that because of his AMAZING support of both the competition, and Faye’s #storycrafter sessions on Twitter, we decided John Cordial needed some sort of runner’s up prize. Luckily, Faye has just released her #StoryCrafter Collection workbook and she very kindly agreed to send John a copy! (I’m going to be working through the collection in the next couple weeks, as I work on my NaNoWriMo project, so stay tuned for daily reviews of how it’s going!)

The support and encouragement from everyone across all our social media platforms has been absolutely incredible and I cannot thank you all enough!

For those who couldn’t enter the competition, we’re sorry you missed out, but don’t worry! Jozi Flash 2017 will be releasing soon, and it’s a free download!

It’s not quite the Gummi Bears, but it certainly bounces around a lot.

Jozi Flash 2017 combines the talents of ten brilliant authors with one gifted artist, to bring you a collection of 80 flash fiction stories across eight different genres.

From a children’s story about the folly of summoning dragons, to the horrors held in deliciously treacherous ice cream, the authors take you on journeys that weave fantasy and folklore together alongside practical detectives and everyday tragedy.

With stunning artwork prompts by Nico Venter, these South African authors have created an anthology that will leave you breathless.

I’m also excited to let you know that a few of the Jozi Flash 2017 authors have teamed up with Musae Mosaic to contribute to their #200WT this month! This is the perfect opportunity for you to get a sneak peak at the talent that awaits you in the anthology!

Now, without further ado, here is this week’s writing prompt:

Hopefully we’ll see a host of entries this week!

This week, I want to look at editing plot. Making assumptions (again), I’m looking at completed first drafts. This will apply to any form of writing that requires a plot – flash fiction, short stories and novels.

Once you have your completed first draft, you should be able to create a synopsis. This is if you haven’t done that in your planning process, because – hands up – not all of us are planners. If you already have a synopsis, I commend (and secretly envy) your planning skills.

Flash fiction may not necessarily require a synopsis – let’s face it, it’s redundant in stories that short. However, it’s still vitally important that the story have a plot.

What is a synopsis?

What isn’t a synopsis?

Now that you know what it is and isn’t, it’s time to take your completed story and create the synopsis. For each chapter, or scene if you’re working with a shorter story, write a couple of sentences about what happens.

Once you’ve got the whole story in your written synopsis, it’s time to summarise it into bullet points. (I like bullet points because they’re quick and easy to refer to.)

Once that’s done, you’ll want to go back to your first draft and as you read, check off the bullet points of your synopsis. If important plot points don’t appear in your novel, you’ll need to decide whether you want to include them or if the story works better without them. Likewise, if plot points appear in your story, but not in the synopsis, you’ll need to decide whether to keep them or take them out.

As you’re checking your list, make a note about whether the plot point gets tied up at the end of the story, or if it remains a loose end. Unless you’re writing a series, you’ll generally want to ensure all loose ends are tied up once the story is finished.

Remember that this doesn’t have to happen all at once. Take time to rest between tasks or chapters. If you’re not a planner, this can feel overwhelming, and it’s easy to lose interest if you don’t give yourself permission to take a break when you start feeling your attention wandering.

Below is a printable that you can complete as you work through your draft:

Have you got a tried and true method of editing plot? Do you write your story synopsis before or after the first draft?

I had intended to post a downloadable character creation template today… But then I received an email from Kristen over at Well-Storied, and I knew I had to share it with you instead.

I really love what Well-Storied stands for – creating and sharing brilliant resources for writers based on a “pay-what-you-can” principle.

I understand that writing for a living is a difficult process, that putting time and energy into creating resources that benefit others has to result in some sort of benefit for the creator. We can’t all be starving artists, and let’s face it – our muses tend to go on strike when they’re hangry.

I downloaded the Crafting Incredible Characters resource without making a financial donation because I simply can’t afford to at this time. What I can afford to do, is to share it with you, tell you that it’s a gorgeous in-depth template for creating characters that fit the tips I posted on my TTT this week, and that I highly recommend downloading it if you’re taking part in Plotober and NaNoWriMo.

We all have amazing stories to tell – it’s what drives us to write – but more than that, we have the ability to support and encourage the people who help us tell them while sharing their own.

Let’s not waste it.

Today we’re going to look at editing dialogue. I’m making the assumption that you already know how to write dialogue, have written a fair amount of it, and now need to edit it.

There are plenty of others, but today I want to deal with how to edit for these particular mistakes.

“Screw you!” she balled her hands into fists, resisting the urge to punch the smirk off his face.

Bear in mind that the above example needs to reflect the personality of the characters as defined in point 1. It doesn’t help to have a character described as timid and placid if she’s running around getting violent with other characters.

John told Mary that he’d had a really long day at work and didn’t really want to go to dinner with their friends Jenny and Chris. Mary sighed and thought to herself that it was always going to be this way. He would never want to do anything with her friends.

This can be changed to dialogue very easily:

“Work was exhausting.” John put his briefcase down and leaned over to kiss Mary where she sat at the table. “Janice made a complete mess of the accounts and I spent all day trying to fix it.”

“I don’t know why you don’t just fire her. She’s always making mistakes which you have to fix.”

“I feel bad. She’s going through a hard time with her divorce.”

“I guess.” Mary hesitated. “You haven’t forgotten about our dinner with Jenny and Chris?”

“Is that tonight?” he sighed. “I suppose it’s too late to cancel? You can go by yourself, can’t you? They really only want to see you anyway.”

“That’s not true. They want to see both of us.” She looked at his tired face and felt a pang of sympathy. “I guess I can go alone, if you want to get an early night.”

“You’re the best. I’m gonna go shower.” He left the room, and Mary picked up her phone to let Jenny know they’d be a party of three. Again.

Remember when you’re writing dialogue, you’re giving your characters an opportunity to express their feelings about the story you’re telling. Have fun with it – after all, you speak to people every day. Why shouldn’t your characters?

How do you feel about dialogue? Do you enjoy writing it, or is it a nightmare exercise? Do you find editing it easier than the initial writing process?